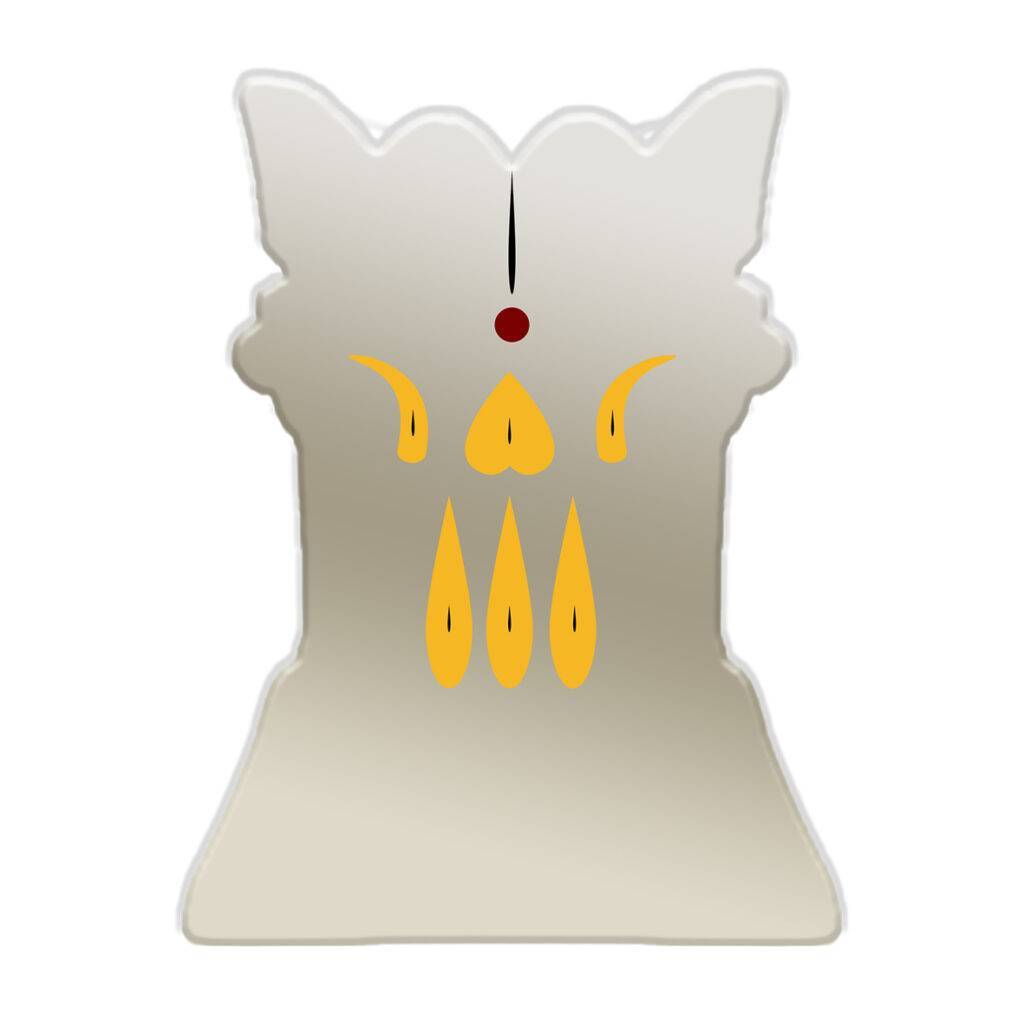 His grandfather’s name is recorded as Śrī Venkaeanarasiṁhācārya with the following adjective: ‘Muśṭiparimita Svarṇamālālaṅkṛta’ that roughly translates as ‘the one decorated with a golden necklace with dimension of clenched fist’, which perhaps was presented as a scholarly recognition, indicating a continuing scholastic tradition in the family. The saint in his Pūrvāśrama had his elementary education under his grandfather and seemed to have moved on to Kumbhakoṇa to continue higher education. We understand from one of his scholarly works that his Vidyā guru was none other than Śrī Vijayīndra Tīrtha: ‘Vijayīndra Yatīndrakyān Seve Vidyā Gurūn Mama.’

We understand from tradition that Śrī Rāmacandrācārya resided at Śrīmuśnam Kṣetra and was a very respected scholar. Once Śrī Rāmacandrācārya was on a visit to Tirumala and did not get the Lord’s darshana even after a long wait. He may have left after doing Atmanīvedana uttering with remorse what was said by Kanakadasa ‘Siriya Madave Mukundā Ninna Caraṇa Sevakana Binnaha Parākĕl̤ŏ Deva’ that roughly translates as ‘Oh Mukunda, you don’t have time for your devotee having been immersed in arrogance due to your affluence’ and supposed to have added, ‘however, when it comes to defending your credentials, you have none else except me’.

This seems to have happened exactly at the time when Śrī Śrīpati Tīrtha was praying to the Lord for a worthy successor. Providence willing, the Ācārya is ushered in for darshana, and happened to meet his to-be-Āśrama guru right in front of the Lord that prompted the guru to make the decision of bestowing him the fourth order of Sanyāsāśrama. The ordination itself seems to have happened at Svāmi Puṣkariṇi at Tirumala Kṣetra with the appellation Śrī Rāmacandra Tīrtha, perhaps foretelling His future accomplishments.

Significant activities that happened during the Saint’s reign are summarized below:

The timeline of the Saint in the tradition was one of intense philosophical activity. Śrī Vyāsa Tīrtha’s three compositions had opened-up the floor for polemical discussion between Advaita and Dvaita rival schools, and exchange of thoughts on the appropriateness of each by scholars from either side. It was at this time that providence sent Śrī Rāmacandra Tīrtha to the scene, well-equipped to contribute his might, well prepared for this task by his Vidyā guru, who was an authority on this front.

The Saint took-up the task of addressing concerns by composing expository texts on some of the more complex works of Ācārya Madhva and commentaries of Śrī Jayatīrtha’s commentaries. Scholars opine that the saint’s compositions brim with fresh and new thoughts on the subject matter with appropriate citations from various sources done with extreme felicity.

The second task taken up by the saint with intense fervour was the willingness to engage in open debates to address any concerns made on the appropriateness of Ācārya Madhva’s Tattvavāda. We understand from tradition that the saint gave extreme importance to Ākṣara Brahman: ‘Vāgabŏmmālĕ Bŏmmalu’ seems to have been his breath. Mere action – rituals – without interest in acquiring Knowledge was not acceptable. Additional emphasis on acquiring knowledge to clarify misunderstandings was given very high priority..

During one of his Cāturmāsya Dīkṣĕ near his native place, the saint was instrumental in convincing the people of a whole village to accept Tattvavāda and gave them Vaiṣṇava Īĕkṣa. This conversion en masse happened at Pennatur. Those people go by the name ‘Aravelu’ today and are a sub-sect of the Ṁādhva community. Additionally, two other sub-sects ‘Kambālavaru’ as well as ‘Pennathurar’ still exist in Tamilnadu even now.

The third task undertaken by the saint was to standardise and codify rules and regulations for the observance of different rituals in the Śrīmaṭha throughout the year. We understand that the saint was adept at Smṛti granthas and gave definitive guidelines to determine Ĕkādaśi, Viddha Ḍaśami, Sādhana Ḍvādaśi and the like. These directions have continued to date in the Srīmaṭha. For this reason, the saint was recognized as the ‘Sampradāya Pravartaka’.

The fourth task pursued by the saint was knowledge dissemination. Besides having authored treatises, he was successful in developing skilled disciples that carried the tradition forward. Tradition records that he had two disciples: a Biḍi-Sanyāsi by name Śrī Ratnagarbha Wodeyaru and a Gṛhasta by name Śrī Vativala Narasiṁhācārya that composed expository texts on scriptural literature and their commentaries. We further understand that Śrī Lakṣmīpati Tīrtha (the third in succession) was born with the blessings of his guru, tutored by him and ordained to the Pīṭha by Śrī Lakṣmi Nārāyaṇa Tīrtha.

On one occasion, miscreants seem to have attempted to harm the saint during transit by rolling a rock atop when the entourage was transiting through a passage. The saint instructed the rolling rock to stay put and ‘lo behold’ it stood in space due to his yogic power. This rock can be seen even today atop the saint’s Vṛndāvana!

Tradition records that the saint debated with a Mimāṁsa scholar Kṛṣṇa Śāstri at Kumbhakŏṇam and firmly established Tattvavāda. As a mark of respect, the scholar donated his home, the same premise where Śrīmāṭha stands today, housing the holy Vṛndāvana of Bhāśya Dīpikācarya and his other two successors. Epigraphical records indicate that the saint was also a recipient of a land grant near Yelahanka from Immaḍi Kĕmpe Ġŏwḍa.

The saint is believed to have consecrated the Narasimha Vigraha in Śrī Vyāsarāja Maṭha premises at Śrīmuśnam Kśetra as well as the Vigrahas of Lakṣmī Nārāyaṇa, Veṇugopāla Kṛṣṇa and Hanūmān in Lakṣmī Nārāyaṇa Puram near Panrutti town.

Having had an illustrious and eventful Sanyāsāśrama, the saint came back to Vellore and seems to have ordained Lakṣmī Vallabha Tīrtha to the Pīṭha here before attaining Haripāda. His Vṛndavana is housed right opposite to his guru in a manner that the guru and shishya are face-to-face, conveying as though they are still doing Vyāsanga!